Our guest character today is Cookie Wagner, a character out of Maureen Brady's GETAWAY. Enjoy the interview!

Red-headed, (I should be gray by now but have late-turning hair gene from my father), blue-eyed, slightly impish smile. I’m 5’2” and somewhat athletic—at least I go to the gym twice a week and hope to play some tennis this summer.

I am sitting in my studio, a little red building across a stream from my house near Woodstock, NY, in the Catskills, working on preparing for my book to come out within another week. It’s a rainy day and the sound of the rain on the roof and the running of the stream are lovely, but this spring is so slow in coming, I yearn for the sun. If it weren’t raining, I would probably be planting peas in my garden.
.
Describe the outside of your home.

My home is an old farmstead, originally built in 1869 and then added onto. It’s solid and a lovely old place that has undergone a series of renovations, and one of the outbuildings is my studio, where I can write with no phone interruptions.

I’m having a hard time thinking of a worst enemy, but if I come face to face with a past friend I had a falling out with, I walk away and try not to let the meet up ruin my day.

Right now my favorite piece of clothing is a leather jacket I indulged in buying last summer when I went to Florence, Italy, after great prodding by my partner and an excellent salesman. But now that I have it, I enjoy every moment I have a chance to wear it. It’s an interesting green color and feels soft as butter.

I am fairly aware of mortality though I anticipate a long life as I am in excellent health, thanks to exercise, mostly good diet and good luck, so far. I like how Stephen Levine in Who Dies talks about what happens the moment someone gets a life threatening diagnosis. He or she makes two lists: What I will lose, and what I will no longer have to deal with. In other words, I don’t have to make that appointment to get my teeth cleaned once again, I can stop worrying about having enough money to get older on, no more having to do my taxes, etc., etc. But my life is rich and there are many things I would regret having to give up.

Read until I am falling asleep and have no idea what I just read.

I am not married but live with a domestic partner of 23 years and a delightful Cairn terrier for the past 10.

One of my favorite novels starts out this way. Everyone Brave is Forgiven, by Chris Cleave.  Assuming it is war on the homeland, I would huddle with my partner and make some plans. I would be grateful that we grow a garden and usually have plenty of food. I would do whatever I could to work toward peace. 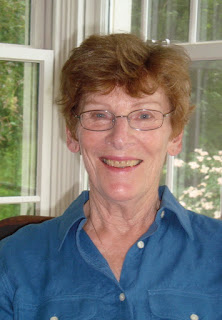 Though Maureen Brady wrote the humor column of her junior high school newspaper, she didn't actually comprehend that she was a writer until after she had moved to New York City in her twenties, where she began taking writing workshops at The New School and then fell headlong into the consciousness raising groups of the early 1970's.

She published her first novel, Give Me Your Good Ear, in 1979, and it was published by The Women's Press in England in 1981. Her novel, Folly, was excerpted in Southern Exposure, received wide critical acclaim, was nominated by Adrienne Rich for an ALA Gay Book Award and was reprinted as a classic by The Feminist Press. She published a collection of short stories, The Question She Put to Herself, in 1987, then turned to writing nonfiction in the '90's, publishing Daybreak: Meditations for Women Survivors of Sexual Abuse and Midlife: Meditations for Women. She returned to fiction with the novel, Ginger's Fire, and her most recent novel, Getaway.

Her recent work has appeared in Sinister Wisdom, Bellevue Literary Review; Just Like A Girl; Cabbage and Bones: Irish American Women's Fiction, Mom, In the Family, and Intersections: An Anthology of Banff Writers. Brady's essays and stories have been nominated for the Pushcart Prize and were finalists for the Katherine Anne Porter Fiction Prize and the Nelsen Algren Short Story contest.

An Adjunct Assistant Professor, she teaches creative writing at New York University and New York Writers Workshop @ the Jewish Community Center, and works as a free-lance editor and tutor, helping writers across the spectrum take their writing to the next stage.
A co-founder of Spinsters Ink, Brady edited such books as The Cancer Journals by Audre Lorde and The Woman Who Breathes Fire by Kitty Tsui. She also served as a panelist for The New York State Council on the Arts Literature Program and as a fiction judge for Oregon Literary Arts. She is a founding member of The New York Writers Workshop and has long served as Board President of Money for Women Barbara Deming Memorial Fund.

She has received grants from the Ludwig Vogelstein Foundation; New York State Council on the Arts Writer-in-Residence; New York State Council on the Arts CAPS grant; Holding Our Own; Briarcombe Foundation; and The Virginia Center for the Creative Arts Fellowship to The Tyrone Guthrie Centre, Ireland. She was the winner of the Saints and Sinners short story contest for 2015 and is also a Saints and Sinners Hall of Fame winner.

She lives in New York City and Woodstock with her long term partner, Martha, and their joy dog, Bessie. 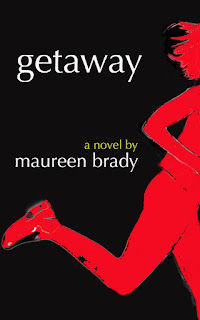 Title: GETAWAY
Author: Maureen Brady
Publisher: Bacon Press Books
Pages: 230
Genre: Women’s Fiction
BOOK BLURB:
After stabbing her abusive husband and leaving him dying on the kitchen floor, Cookie Wagner flees to remote Cape Breton, Nova Scotia. For a moment, she seems to have gotten away with murder. But, consigned to a secretive life with a new name and the need to be on constant alert, she faces all she has not gotten away with. She is helped by the recently widowed Mrs. Biddle, who offers her a place to stay, and the lobster fisherman Butch, who gives her a job and later falls in love with her. Walking the cliffs and beaches, taking in the scruffy windblown plants that survive the buffeting wind by growing at an angle, she begins to heal.

Yet, there is no leaving behind the notion that Warren is dead as the result of her action.
Or is he? And if not, will he one day come to find her?

Sexual harassment and abuse are all over the news these days, often involving celebrites and other well-known figures, but Cookie, the protagonist of Getaway, is no celebrity. She’s an ordinary woman married to a working class guy who drinks too much and resorts to violence. Their story reveals how endemic the phenomenon of abuse is, and the quandary Cookie lands in when she fights back.

“Sensitive, sensual, and stirring. "Getaway" is a true page-turner, but one with heart and with context. I couldn’t put it down until I got to the end, not just to find out what happened, but also to discover who these intriguing and complex characters would develop into. An extremely satisfying read!”

Getaway is available at Amazon.