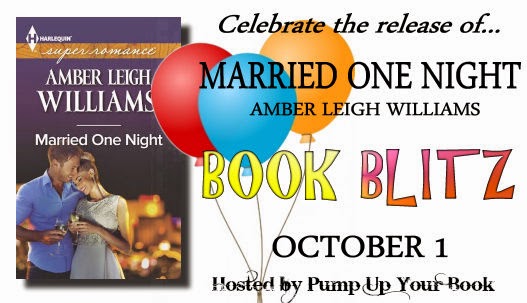 We're happy to be hosting Amber Leigh Williams and her MARRIED ONE NIGHT Book Blitz today!  Be sure to enter the $25 Amazon Gift Card giveaway below.  Giveaway ends 12 a.m. October 2! 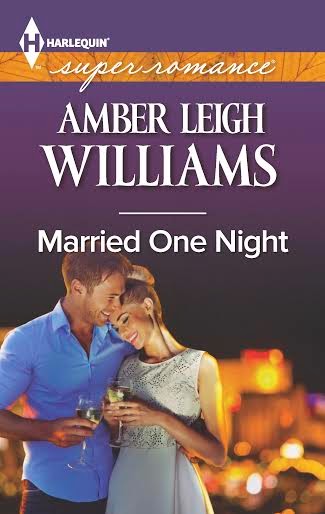 
What happened in Vegas…followed her home!

Olivia Lewis is not the marrying type. So when a wild weekend in Vegas leaves her with a surprise husband, she's happy to sign anything to erase her mistake—even if that mistake is handsome, charming and comes with an English accent. Fortunately, her groom has other plans.

Bestselling author Gerald Leighton knows he can make his new bride fall in love with him—he just needs time. In exchange for a quickie divorce, Olivia grudgingly gives him a few weeks to attempt to woo her. And whether Olivia likes it or not, Gerald plans on using every second to win her heart!

Before Olivia could shoulder her way through the door, it opened quickly. She felt herself pitch over, tripping over the edge of the bedsheet. Cursing, she fell against the lean, chiseled chest of the man on the other side of the bathroom doorjamb.

She heard his surprised whoosh just before his arms snagged her under the shoulders and curled around her to keep her from falling at his feet. Her cheek pressed tight against his sternum. He was so warm. The deep timbre of a chuckle trebled beneath the ear pressed to his chest and words, rough around the edges, came floating from his mouth. “Ah, she wakes.”

When she tried to pull herself back, he held her fast to him for a moment longer to make sure she had her footing. With a murmured, “Easy there, love,” he released her and she stepped away, seeking his face.

He was smiling. The soft expression was tense around the edges, probably from what she could guess was a good deal of pounding happening on the inside of his head, too. She drew in a breath. His eyes were a brilliant shade of green. Dimples, or laugh lines, dug in around his mouth and the corners of his eyes. A man who smiled often and laughed well, Olivia surmised. His hair was blond and wet from a shower she assumed, judging by the steam behind him. He’d combed the hair back from his forehead, leaving his high brow bare.

A towel hung loosely around his waist. She blinked. She was staring. But the longer she stared, the more she could remember from last night, and the giddy spontaneity and blistering heat of all that had transpired made her forget for a moment how miserable she felt.

And, bless him, he didn’t seem to mind the staring. He was doing a good bit of his own. The smile on his lips deepened into a full-fledged grin, eyes softening further as he took her in. “Well. Aren’t you a sight for sore eyes.”

She found a smile curving at the corner of her mouth. He was British. His words were enunciated with the high-class sounds of English breeding and good humor. His voice was like fine-aged wine. Or whiskey.

Whiskey, she decided. It had a good, old-fashioned burn to it.

Lifting her hands to the sheet knotted just under her collarbone, she made sure it was in place before dragging a hand back through her long, curly, bedraggled tresses. “Erm…good morning?” Olivia said, unsure of herself. Usually, she knew how to navigate the awkward, morning-after interlude. But this stranger’s clean-cut, unexpected appeal threw her for a loop.

He beamed and held out a hand, skimming far and above the awkwardness of the situation with good-natured ease. “Gerald Leighton. It’s lovely to meet you…again.” 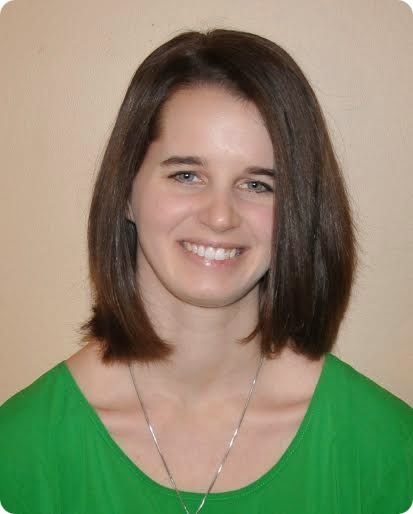 Amber Leigh Williams lives on the Gulf Coast. A southern girl at heart, she loves beach days, the smell of real books, relaxing at her family’s lakehouse, and spending time with her husband, Jacob, and their sweet, blue-eyed boy. When she’s not running after her young son and three, large dogs, she can usually be found reading a good romance or cooking up a new dish in her kitchen. She is represented by Joyce Holland of the D4EO Literary Agency.

Her latest book is the contemporary romance, Married One Night.
For More Information

Amber is giving away a $25 Amazon Gift Card!


a Rafflecopter giveaway
The Literary Nook posted at 10:59 AM