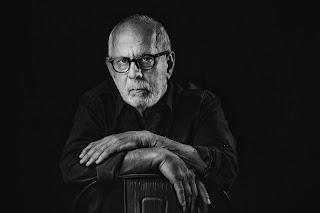 LARRY SPENCER published his first novel, The Tipping Point Of Oliver Bass in the summer of 2017. A story that covered the life of a pathologically arrogant, wealthy young man who sets off on a journey of self-discovery, family tragedy, and sexual conquest in a modern California noir backdrop.   Spencer has been a Writer’s Guild of America member since the late 70s, having written and produced a multitude of highly successful TV shows, which culminated into writing several feature films. He was then encouraged to pen his second book, Material Things, a story based on true events that takes place in the 60s &70s and tackles organized crime, drugs and embezzlement during a time when bellbottom pants ruled the fashion scene.  He lives in Valley Village, California. 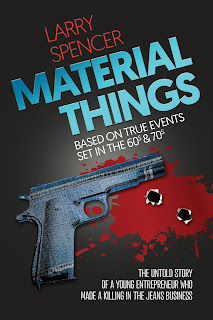 Title: MATERIAL THINGS
Author: Larry Spencer
Publisher: Independent
Pages: 367
Genre: Fiction
BOOK BLURB:
Larry Spencer’s riveting, interlocking narratives circle the lives of Matthew Street, Jon Lewis and Christopher Styles, in a 1970s California backdrop that takes them from owning and operating a fashionable clothing boutique into the gripping world of an FBI under cover operation, drug trafficking, prostitution and a nefarious criminal element, that brings to light a Mafia contract killer, who’s out to bump off a stoolie in their midst.
Material Things is based on true events surrounding the store that introduced bellbottom jeans to a hip Southern California crowd and how it became, not only a cottage industry but also an arena fraught with danger and moral strife that put the store and it’s owners under close scrutiny after an alarming number of felonious activities surface.

The climax is anything but conventional as Matthew, Jon and Christopher are confronted with a life threatening reality that they never imagined could happen just by selling bellbottom pants.

Thanks for this interview, Larry, and congratulations on your new book! Would you say it’s been a rocky road for you in regards to getting your book written and published or pretty much smooth sailing?  Can you tell us about your journey?

Here’s the thing. I love to write. I write everyday. I’ve never had writer’s block. I’ve always had something say, but not all of it is superb. A lot is crap but I keep going. Smooth sailing? No. The hardest part for me is marketing this book. I know nothing. I still know nothing. I need help in this area. I love the process. I hate the results if I’m going to fail.

Larry Spencer’s journey from TV to Film to Novels—in just over 30 years.

Watch a lot of movies and good TV on Netflix, HBO, and Showtime. I’m hooked on shows like Sneaky Pete, Bosch, Goliath, True Detective. Look, I spent over twenty years writing bad TV. Except for Taxi. That show was prolific and had strong characters.  I avoid most network shows altogether. I’m an early riser. After breakfast I walk my Golden retriever.

For one the cover I must say is outstanding. It should draw people. I think it has great nostalgic value. It’s relatable in so many ways to everyone or anyone who was in love with the 60s/70s. It has charm, mystery, loveable and hateful characters. And a compelling twist ending that’ll make the hairs on the back of neck stand up. An adrenaline rush. Pretty sure Jack Kerouac would’ve loved this book.

NOVEMBER 10, 2016
7:30 a.m. Valencia, California. A neighbor calls 911 and reports what might have been the sound of a gunshot ringing out from the house next door. Police arrive at the home of Logan Alexander, sixty-nine, and discover a body sprawled in a pool of blood on the floor of the garage. In the victim’s grip is a .357 Magnum revolver.
It's one horrific sight. First responders ID the body as the homeowner, wearing nothing but his boxer briefs and a sweat-stained Grateful Dead T-shirt. A fitting item of clothing in keeping with this unfortunate tragedy. He is noticeably thin and scrawny, almost anorexic, as if he hasn’t eaten in months. It’s reported that the victim is DOA with a self-inflicted gunshot wound to the head. It appears to be an apparent suicide, but they're not ruling out foul play. The only witnesses to this horrible scene were his lawn mower and 2012 Toyota Camry, its engine still idling as if to say, I saw it go down.

Christmas. Because it’s a retro/inspirational gift.

I assume you’re talking about a literary series. This story doesn’t fit that bill. But the book has been considered for a movie.

No. I have a degree in animation. Wanted to be a cartoonist. A real disappointment when I walked away from a career I wanted my whole life and pursued a career in TV.  But it was worth it.

Yes. Think Penguin turned me down. Or never got back to me.

I have to write alone. Or at least allow me to write the first draft alone. I wrote my films with a partner and it was disastrous.  We no longer speak.

Lunch. Then possibly return to my first book The Tipping Point Of Oliver Bass and pick up where it left off. I can’t tell you where I left off because that would giveaway startling  the  ending.
The Literary Nook posted at 12:00 AM