Interview with Thorn Osgood, author of 'The Reclamation'


Thorn Osgood was born in Thomasville, Georgia, and grew up in South Florida. During her grade school years, her father read her stories that fed her imagination. Through the years, she has traveled many times to that special place in her mind to imagine fantastic yarns and what ifs and she has finally started to write them down. This is her debut work. Thorn currently lives in Crawford County, Georgia with her Mittelschnauzer, Raskoph, and his stray cats, Grayball and Tweeky.

His latest book is the scifi fantasy, The Reclamation. 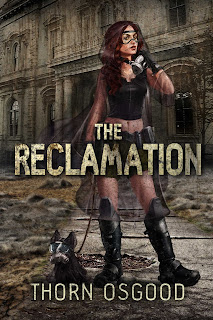 Corilan, 25, is an IT project manager by day, and spends her free time involved in ecological organizations endeavors. When her long-absent negligent father, Nolan, wants to see her she’s annoyed. Finally, she decides to see him and despite the friction over his absence, from that meeting her life evolves. Nolan tells her of his birthright, an environmental organization, the School of Ancestral Guidance (SAG) and its members having ancestral guides. This clarifies Corilan’s gift, a voice inside, something she has never revealed. Knowledge of SAG feeds her obsession against environmental destruction.

Then an invisible entity, Earthos, manifests itself to her and proposes assistance in uniting people that want earth preservation. Years, she has been seeking a way to unite conservationist factions and still has no solution. Inspired by her inheritance, she accepts Earthos’ proposal and infuses with him. Then, she joins the SAG organization. From her infusion, she soon discovers abilities, among them lightning bolt generation, mind reading and control.

Armed with powerful abilities and her ancestral guide, Corilan must take an unexpected path. Then she discovers who her real enemies are and must find a way to defeat them. 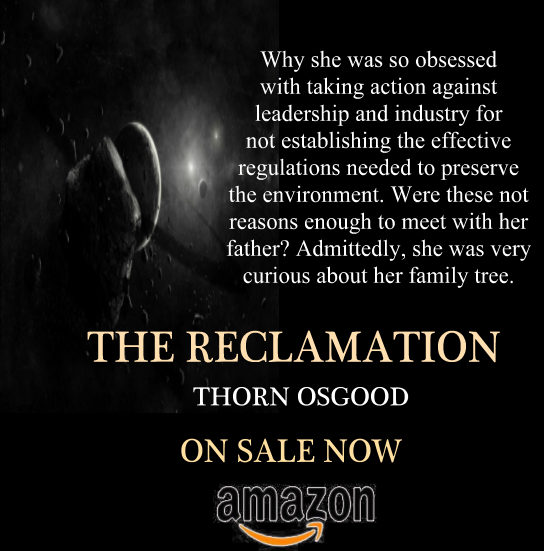 Thanks for this interview, Thorn.  Can we begin by having you tell us about yourself from a writer’s standpoint?

I have been writing for my own pleasure for a decade but have not published any of my works. When an idea came to me that had some fresh aspects, I decided to write with a goal to publish. For me, it was a big step to present my work to the public at large. The Reclamation is my debut story and with great passion I have already begun drafting the third book of the School of Ancestral Guidance Saga.

For relaxation I like to watch movies, a compelling series on Netflix or play with my dog, Raskoph.

Congratulations on your new book! Can you give us the very first page of your book so that we can get a glimpse inside?
Chapter 1

Corilan closed the back door to her new place and carefully removed her siec, making sure the acidic residue of atmospheric particles did not make contact with anything. After taking off her gloves, she removed her ENAZ mask and placed it on one of the moving crates nearby. She examined her siec; a cloak made of biodegradable mesh that served as a sieve to catch and block atmospheric particles. The particles grew heavier after dark and attached to the fabric, creating large clumps of acidic residue that could easily rub off on her skin or quickly eat through more vulnerable materials. Two more wears, she figured. After she shoved her gloves in one of the siec’s pockets, she hung the cloak on the coatrack by the back door. The visibility lens and nasal filters in the mask could be cleaned later.
For nearly five years, this was the process she had gone through daily to go outside, and she was pissed. Life did not have to be this way—it was a widely known fact that the deterioration of the environment was caused by the actions of humans. Yet industry and national leadership chose to do nothing; nothing that was truly effective. She dreamed of finding a way to resolve the environmental problems, in spite of the indifference of corporate CEOs and government leaders. Her body became rigid, her teeth clenched; her hands tensed and became fists at the thought. Those avaricious, self-serving bastards! To lead opposition against the environmental status quo and reverse the damage, that’s what she wanted.

I would have to say, it has definitely been a long journey in getting to the point of publishing. The idea for this book came to me in 2010 and was initially scraps and notes. By 2012 I had begun to compile the bits and pieces and the following year, I began the rewrites. Upon engaging editorial assistance, I completed more rewrites. Then after much contemplation on whether to take the traditional publishing path or the self-publishing path, I decided to self-publish. Once the decision was made, I developed a plan on how to proceed.

The storyline delves into Earth's environment as it relates to our current and potential problems and crises revealed through the experiences of Corilan Troxler as she attempts to unite citizens in Earth guardianship. The aspects of the story include: Invisible aliens living among the people of Earth and one that makes a deal with Corilan; an elite organized lineage of people that are committed to Earth conservation but are losing their influence in government; and the industrial corporations of the trades—their rejection of ecology and their reaction to improvements made by others. How these factions come together and the action that is taken for Earth’s evolution is unique and original.

Earth Day would be appropriate since its organization’s mission is to build the world’s largest environmental movement.

The Reclamation, is book 1 of The School of Ancestral Guidance Saga and will be followed by four more books.

I will continue to work on The School of Ancestral Guidance Saga. The second book, Wayning Chance is in the editing process now and I am working on book three.
The Literary Nook posted at 12:00 AM