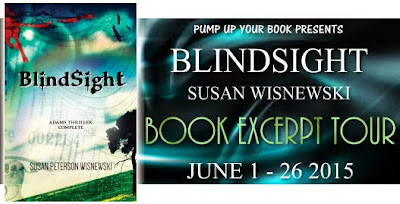 We are thrilled to be hosting Susan Peterson Wisnewski and her BlindSight Book Excerpt Tour today!  If you follow her tour here, you could win a $25 Amazon Gift Card!  All you have to do is fill out the Rafflecopter form below and leave comments on each of her stops for extra entries.  Good luck! 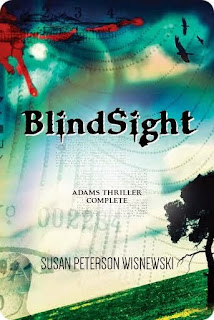 Life is already bad enough after Tisha Adams loses both her job and her beautiful Manhattan apartment. Living in a musty garage apartment and working for her uncle in Queens, her life is upended when she witnesses a murder on her train commute.

When the body disappears, she teams up with Detective Murphy, a man with mysterious abilities. But Tisha is keeping a secret of her own, a skill she’s always hated and feared. The dead speak to her. And if she touches a person, their past, present and future are revealed to her.

But as the body count rises, and those closest to Tisha are drawn into the nightmare, Tisha’s only choice is to reach out to her estranged grandmother to learn more about her intuitive talents. In a race against the clock to rescue those in danger and solve the murders, she’ll need all her abilities. Even the gift she’s been afraid to use. The dead will speak, but only if she’s willing to listen.


The train was empty. I thought about slinking down in my seat to hide from view, get off at the next stop and reenter at the same stop through the doors at the back of the car. I could start a conversation and well, who knows where that could lead? Thinking about my plan, I figured it would only work if he headed upstairs on this double decker train. My mood elevated. The train stopped and the doors opened. Sven entered the car in all of his magnificence. I let out a short-lived sigh of adoration being careful not to let him see me by hunching down. And then, without warning, behind my magnificent hunk strolled something that could only be described as a Ms. Sven. A gorgeous, tall, blond-haired, blue-eyed, too beautiful to be a model woman was with him. Oh, the inhumanity of it.


My life blows. The pair moved toward the upper level stairs then changed their direction and sat down a few rows behind me, further thrusting the knife that jabbed at my heart. Nothing seemed to be working in my life. It figured the amazing Sven was taken. I went back to my voyeurism since I was phoneless. Funny how I could text and read twitter, but if I tried to read a book I started retching. The sun was beginning to peak out and the darkness was lifting revealing the gray of this April morning. The train clanged past Mineola Station, rocking back and forth as if it were about to derail. I couldn’t get used to the motion or the sound of passing trains rumbling by and the awful noise that erupted between the two. Only ten more stops to go. I watched as the landscape changed from suburban trees and well-spaced homes to urban attached homes lacking landscaping that signaled the move from Nassau County into Queens.

As we meandered the long monotonous trudge through empty backyards and later debris strewn industrial lots, I spied two men standing in the street between the warehouses. They looked similar, decked out in their black leather coats and dark denim jeans. Both were large men, perhaps bodybuilders or maybe wise guys. One striking difference between the two was their hair. Both had long dark hair but one wore his in a neat ponytail while the other’s was wild and splaying out in all directions. They were arguing. Hands were flying in the air. Fingers were pointed at each other. The one with the wild hair drew out what looked like a gun from beneath his coat. Time slowed. A shot was fired. Was I dreaming? This couldn’t be real. Was someone filming a movie? My heart was racing. Thoughts scattered. I needed to act.  I saw the smoke from the gun. The man with the long ponytail fell back. Blood was oozing from his chest. This was no movie. That man needed help. My help. I had to act. Time to fall apart was later. The train moved on. My view dissolved. 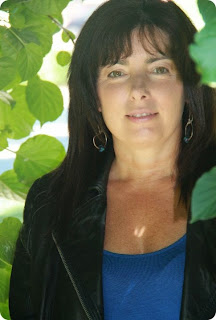 Susan Peterson Wisnewski is an indie author from the northeast. She writes thrillers and paranormal with a sprinkling of chick lit and horror.

From a cruncher of numbers to a stringer of words, she decided it was time to follow her dreams and put down on paper all of those stories that floated around in her head. Raised in New York City and Long Island, she is a consummate shopaholic having been given the gift of style from her mother and grandmother. When not writing, she can be found shopping, visiting museums, gardening, or being walked by her oversized puppy.

Her books are a genre mix all neatly packaged together. Surprise and twists keep her readers guessing and she has been accused of writing books that can’t be put down. Pushing characters to challenges themselves is her trademark as is a creating strong female characters – no damsels in distress here. Her inspiration comes from seeing a situation and then enhancing it to create an unusual story line. And yes, she does see ghosts, or spirits as they prefer to be called and has had her run ins with a fairy or two.

If you have a book club and live on Long Island or in the Southern Vermont area, she’d be happy to come for a visit.

Her latest book is the thriller/paranormal/suspense, BlindSight.

This is how it works. Fill out the Rafflecopter form below and comment on each blog stop to win 5 extra entries!