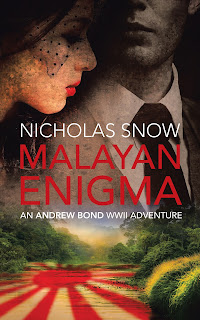 Malaya, 1941 – a fool’s haven from the devastating war raging elsewhere in the world Sent to Singapore towards the end of 1941 to evaluate the intentions of the Japanese Empire, Lieutenant Andrew Bond finds himself embroiled in a series of events accelerating towards all-out war in the region. The city, a heady, exotic blend of cultures teeming with intrigue, is oblivious to what lies ahead. Facing betrayal, incompetence, Japanese spies, and the Yakuza underworld, Bond manages to gather a band of trustworthy companions, including the striking beauty Liu-Yang. In a desperate race against time, he must force his way through enemy-infested jungles and seas to bring home a device that will help change the course of the war – the Malayan Enigma!

Sometimes you start to read a book and just know it is going to be good. Malayan Enigma was one of those books. I am a believer in making sure that you follow up with research if you are going to write a historical fiction book, and while reading this it was evident the author did just that. I am not familiar with this part of history too much - I will admit that I was never a big history fan but when reading books like this it makes me want to find out more.

Andrew Bond reminds me a lot of someone with the same last name - adventure, cunning, skill, he has it all. He is a character I hope will return in more books as he is very fun to follow. The plot moved smoothly and kept me turning page after page. I would highly recommend this book!

Nicholas Snow is the pen name of Nicholas C. Kyriazis, who holds a diploma and Ph.D. in economics from the University of Bonn, Germany. He has acted as visiting professor at Harvard and at the University of Trier. He has worked as a consultant to the Directorate General of Research of the European Parliament, to the National Bank of Greece, and to the Ministries of National Economy and of Defence, and has served as secretary general of Public Administration. Professor of economics at the University of Thessaly, he is a member of the board of Alpha Trust Investment Fund (listed on the Athens Stock Exchange), vice president of Ergoman Telecommunications, and vice president of the Kostas Kyriazis Foundation. He has contributed more than sixty papers to academic journals and has published eight books on economics, history, and strategy as well as a volume of poetry. Poems of his have been translated into English, French, German, Italian, Spanish, and Maltese. As a novelist, he has published eighteen books in Greece, several of which have been translated and published in English, including Themistocles (Kosbil Publications, 2004), The Shield (AuthorHouse, 2005), Assassins (AuthorHouse, 2007), and, in collaboration with Guy Féaux de la Croix, Last Love (Plato’s Last Love) (AuthorHouse, 2014).

The Literary Nook posted at 2:47 PM