Michael Holloway Perronne is the author of eight books including: "A Time Before Me," "Falling Into Me", "A Time Before Us, Men Can Do Romance"  "Gardens of Hope," and"Embrace the Rain."  His debut novel, "A Time Before Me" won the BronzeAward, Foreword Magazine's Book of the Year Award in the Gay/Lesbian fiction category.

His recent release is Gardens of Hope.

On the surface, Jack appears to have all a man in World War II era 1941 could want with his solid middle-class background, upcoming college graduation, and the perfect, devoted fiancee. But one 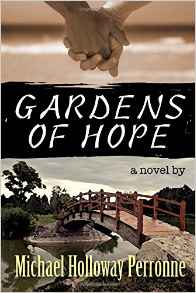 night when he accidentally stumbles upon a shadow life of men who desire other men in a Downtown Los Angeles park, he begins to realize exactly what has always left him with a feeling of emptiness.

Despite the constant danger of being arrested by vice cops, Jack continues to visit the park every chance he has to feel a connection, no matter how fleeting, with another man. One night he meets a handsome and charismatic Japanese-American, Hiro, who appears to want more than a quick encounter, and Jack surprises himself by starting to truly fall in love for the first time.

However, after the bombing of Pearl Harbor, President Roosevelt issues Executive Order 9066 and orders the mandatory relocation of over 100,000 Japanese-Americans, who have never been charged with a crime, to far flung internment camps sites. Jack and Hiro suddenly find themselves torn apart before their secret, fledgling romance can blossom. Desperate to find and reconnect with Hiro, Jack accepts a high school teaching position at an internment camp in the California desert, Manzanar. There, surrounded by armed guard towers and a prison-like environment, Jack begins to fully realize the injustices being faced by Japanese-Americans during one of the most controversial times of United States history and shifts his world view- forever.

Thanks for this interview, Michael.  Can we begin by having you tell us about yourself from a writer’s standpoint?

When not writing, what do you like to do for relaxation and/or fun?  I love travel.  I believe it’s such an enriching experience to be exposed to new cultures and expand your worldview.  It also reminds you that despite our differences all over the world, we’re all much more alike than we are different.  Unfortunately, it’s those differences we tend to focus on at times.

I couldn’t tell you what I had for lunch the day before, but with complete and total clarity I can remember the smile on Hiro’s face the first time we met back in 1941. I had startled at the sight of him sitting on the bench across from me with the moonlight providing the only illumination. Something shifted inside me when we made eye contact. What seemed impossible before, more than a quick, hushed encounter with another man, suddenly became attainable. That chance meeting was so different than the ones I had had before which consisted of fumblings and quick moments of physical intimacy. With Hiro, mutual tender touches and words of affection opened a whole new world to me even though we both realized the strict limitations of what society would allow us to have at the time.
Don’t get me wrong. I loved Howard, the love of my life I met many years later. We spent twenty-eight good years together. Sure, we had our challenges like any couple, including watching so many of our friends pass away in the 1980s that funerals frighteningly became as common as a trip to the grocery store.
I met Howard in 1972 at the Twin Peaks bar in the Castro area of San Francisco right after it became the first gay bar to have actual windows where the patrons could see outside and vice versa. He stood out to me with his fit build and thick silver hair. Just a few weeks earlier, I had turned fifty-three. I had long given up on love at that point, but in this case love seemed to find me and not the other way around. We bonded that night over our dislike for the loud music the bars were so fond of blasting. At the time, there weren’t many other options for meeting men like us, so hanging out at a bar was the default for socializing. We both made our way outside to smoke cigarettes and continue our conversation. Six weeks later he moved in with me and our lives gradually merged, and four years ago a stroke, quickly and without any warning, took him away from me.
Still, I kept his reading glasses on the end table next to the sofa as if he might walk into the room at any moment and ask, “Did you see where the hell I put my glasses this time?”
Many, many years before, I had told Howard about Hiro not long after we met one night over dinner at a coffee shop close to Nob Hill.
“Who was your first love?” Howard asked, over a corned beef sandwich.
“You,” I said, giving him my best mischievous grin.
“Don’t bullshit me,” he said smiling and cocking an eyebrow.
Howard always got right to the point.
I told him about Hiro, Pershing Square Park, the Japanese evacuation from Little Tokyo in Los Angeles, and my surprise reunion with Hiro in a place that would change me and shake my worldview for the rest of my life.
After I told him the whole story, he looked like he was on the verge of tears. Howard, the man whose emotions were made of proverbial steel, began to choke up a little.
“You don’t know what happened…” he started to say.
“No, I don’t,” I said, cutting him off. “I try not to think about some of the possible outcomes, either.”

Gardens of Hope was my first historical novel, and I was very nervous at first to even attempt writing it.  The forced relocation and imprisonment of over 100,000 Japanese-Americans during World War II is a topic we as country do not like to speak about.  It’s hard to imagine that we did something so “un-American.”  Yet, it happened.  And it’s a reminder of what happens when we let irrational fear overtake our hearts.

Can two men from the same city but segregated worlds maintain a connection during a time in US history that not only brands one of them as the enemy but denies that a love such as theirs exists?

I hope that Gardens of Hope inspires readers to learn more about both Japanese-American internment and the early gay rights movement.

I would have to say Independence Day, July 4th, as the story is a reminder that we, as a nation, need to stand up for the rights of all of our fellow Americans and not just be moved to action we when feel something impacts us directly.

Currently, I am working on a new novel, The Other Side of Happy, that focuses on a divorced couple that is faced with their own prejudices when their teenager comes out as transgender.  I’m hoping that it’s another story that will maybe help start a dialogue on an issue that needs more awareness.