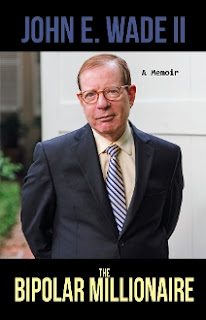 John E. Wade II, retired CPA, author, investor, television producer, and philanthropist, reveals in his memoir, The Bipolar Millionaire, his personal struggle with bipolar disorder and how he has succeeded in living a balanced and blessed life, despite his mental illness.

Wade takes the reader through his family experiences, political aspirations and beliefs, spiritual journey, relationship trials and errors, all while battling mental illness.
Through his religious beliefs, personal perseverance, and the help of friends, family, and his mental health professionals, Wade lives an active, creative, and successful life.

His memoir doesn’t end with contentment at achieving a balance in his life, however. Instead, Wade expresses a determined vision for the future, aiming to assist humanity in what he describes as achieving heaven on earth through his writing, political and spiritual endeavors.

I love doing first chapter reviews because I believe that the first chapter really gives readers an idea of where the book will be going or should be. I was interested in reviewing the first chapter of John E. Wade's The Bipolar Millionaire because a) the title intrigued me and b) I was hoping it was one of those stories that showed you despite someone's handicaps, they could still go on and make a success of their life.

In John's first chapter, he takes you back in time to his first experience to what he believed to be a bipolar attack.  He had had meningitis which he believes brought on the bipolar attack.  He couldn't understand what was going on as he had been in perfect health throughout cadet school.  He had high aspirations - even to the point of aiming for the White House - before all this happened.  His girlfriend left him during this time and ordinarily that would send anyone over the edge.

This first chapter left me wanting more.  I wanted to know what happened - what happened after Cadet school?  Did he get his girlfriend back?  Did he continue with the attacks to the point where it was unbearable to live?  What about these millions?  Did he already have millions or did he make them later?

I will be reviewing this book soon and can't wait to read more!
The Literary Nook posted at 12:00 AM