JOEL CRAIG is a nurse who works at a busy hospital in Los Angeles and lives with his husband, Donovan. They have been married twice with the second time finally being legal. In addition to writing about nursing, Joel is also an actor, having appeared in the films, Sideshow and Sordid Lives. Currently he is acting in the web series, What’s My Intention? He's working on his next graphic novel, Vampire Nurse in Hollywood.
His latest book is the graphic memoir/nonfiction, Welcome to Nursing HELLo: A Graphic Memoir. 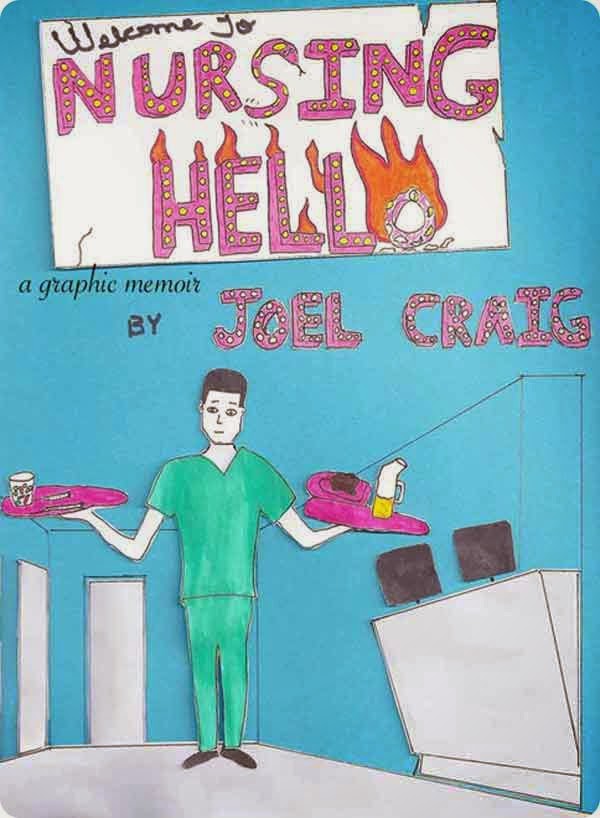 Q: Thank you so much for this interview, Joel! Can you tell us where you are from?

Thanks for having me. I was born in Nashville, Tennessee, the home of country music. I did not want to be a country music singer or star but I wanted to be a movie star so I moved to Los Angeles but lived in Indianapolis and Chicago along the way.


Q: How did you come up with your title?

I had seen this movie as a kid called Motel Hell, this horror movie where bad things happen when people stay at this certain motel. The sign at the motel is supposed to say “Motel, Hello” but the O is burnt out. I thought that was funny. I named my book Welcome To Nursing Hello but, on the cover the O is burnt out so it looks like Nursing Hell.


Q: They say you can judge a book by its cover. Can you tell us a little about your cover and who designed it?

I designed the cover myself. I guess I’m summing up nursing in two ways. Cleaning up bodily fluids and giving pain medication. There’s more to nursing than that but, when I worked in med/surg nursing it felt like that.


Q: Can you tell us something about your book that would make me run out and buy it?

I make fun of nursing in a way no one else ever has. You’ll laugh your ass off.


Q: Are there any messages in this book that you want the reader to know about?

You mean like subliminal? No, I know that’s not what you meant. It doesn’t really matter the reason why you do something like becoming a nurse. What matters is that you do the best job you can possibly do. Learn from my mistakes.  You know those videos where you watch the “right way” customer service and then you watch the “wrong way” customer service. My book is the “wrong way” a lot of times and it’s hilarious.      Also, most of the time creative people can’t make money at what they love to do. This is what my book is about and, how I try to process the whole journey.


Q: What was your most favorite chapter to write and why?

One of the dream sequences where I find out Madonna is playing in One Flew Over the Cuckoo’s Nest  on Broadway, co-staring with her ex-husband Sean Penn and, on top of that, being directed by her other ex-husband, Guy Ritchie. The lesson there is never work with more than one ex-husband at a time.


Q: Why did you feel you had to write this book?

I showed some of my pages to another RN named Loretta (who is in my book)  and she fell out of her chair laughing.  I didn’t expect that sort of reaction. And she wasn’t just laughing at me. Not 100% anyway.  I thought sure some of my stuff is fun but maybe other people might react like her so I kept writing. This is the end product.

I liked to play as a child. I would go into my parents’ attic and explore. I found my sister’s old Barbie dolls from the 1960s and I was in heaven. I even built the dolls this giant cardboard house. I wish I had a picture of that. But I was afraid the kids in my class at school would find out after I showed a buddy of mine the dolls. If I knew what I know now how sometimes it really doesn’t matter what people say, I would have taken the dolls to show and tell.


Q:  If you could travel anywhere in the world, where would it be and why?

I would go to Walt Disney World in Florida because you can go to EPCOT center and all the countries are within walking distance. People really can see Russia from their backyard. Or I guess China since they don’t have Russia there.


Q: Are you a morning person or a night person?

Definitely a morning person. If I sleep in late I feel like I’m sleeping the day away.


Q: Are there any members in your family who also like to write?

I can really only think of my sister, Belinda who writes short stories about our family. She doesn’t want to write about the dirt of our family which there really isn’t much of anyway. But she’s a good writer. I keep telling her she needs to write a book and self publish. After all, she is the Czarina of Mt. Juliet. (Mt. Juliet is where she lives.) But I could kill her for later selling those Barbie dolls. And she sold them cheap too. I was mad.

Oh, yes. I wanted to go and live in outer space with the cast from Star Wars (especially Han Solo) accompanied by my sister’s Barbie dolls of course.

Q: Last but not least, the magic genie has granted you one wish. What would that be?

I want my book, Welcome To Nursing HELLo, a Graphic Memoir adapted into a cartoon series for the Comedy Network.


Q:  Thank you so much for this interview! Do you have any final words?

I want more questions! This Q & A was kind of fun. Final words? Hmm, oh yea watch this web series I co-wrote with Stephen Foster that I am also acting in. It’s at:
www.Youtube.com/whatsmyinention  I play the character of Josh.  I also have a link to one of my scenes at my website at: www.WelcomeToNursingHELLo.com