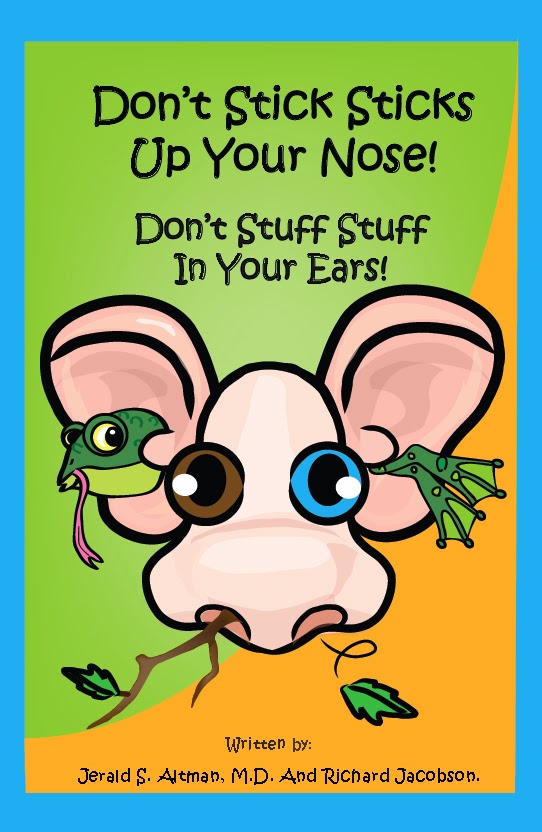 Stuff in their Ears? Sticks up their nose? Let's keep things out of our kid's ears and nose! Rhyming and beautiful, bright and colorful illustrations will gently remind children to avoid putting things where they don't go! After 14 years of practice, Dr. Altman never ceases to be amazed at what children will think of to stick up their noses or stuff in their ears. From rocks to raisins, paper to peanuts, crayons to candy and buttons to beads, Dr. Altman has removed them all! Sometimes adults marvel at the wonderful curiosity of young children...until their inquisitive natures cause them to insert unimaginable objects into inappropriate places. It's difficult to appreciate a child's creativity when it might cause a medical emergency. Don't Stick Sticks Up Your Nose! Don't Stuff Stuff In Your Ears! explains to children, in a fun, colorful, and memorable way, why it's a good idea to avoid such behavior. The kids will soon be repeating the rhyming verses while being gently reminded not to stick things up their noses and not to stuff things in their ears.

Jerald Altman is an Otolaryngologist-Head and Neck Surgeon (ENT Doctor). After publishing many peer-reviewed journal articles, he recognized the need for a children’s book dealing with a common problem in his practice. He was recognized as a Phoenix Top Doc in 2010, 2011, 2012 & 2013. He is a general Otolaryngologist and he loves taking care of children’s ear, nose and throat issues. Accordingly, the idea for this book came from his pediatric patients and their incessant need to put things where they shouldn’t go!

Richard Jacobson studied architecture at Yale University and has spent most of his adult life designing interiors, landscapes, tablescapes, clothing... and just about anything else that can be fashioned in a creative way. He lives in Phoenix and  enjoys training dogs, birds and topiaries in his spare time. He once collaborated with his co-author's (then) seven-year old daughter on a painting for her newly-decorated bedroom. Asked by her mother how she had enjoyed the experience, she replied bluntly, "He's a little controlling." Years later, her accurate judgment tempered the rhyming verses he used to gently guide young children's behavior.

The Literary Nook posted at 2:02 PM